Netball coach forced to sell masks ... - as COVID continues to wreak havoc on the sporting sector 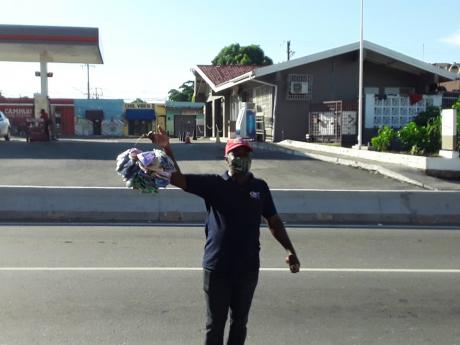 With the cancellation of a number of netball tournaments due to the coronavirus pandemic and no income coming in, Hagley Park United 's netball coach Dale 'Bernard' Schroeter has now resorted to selling masks on the streets of Kingston to eke out a living.

Schroeter, who has been coaching for over 40 years, currently sells his masks at the intersection of Waltham Park and Hagley Park roads.

When STAR Sports visited the area at approximately 6:45 a.m. yesterday, Schroeter was seen very busy picking up some sales in the early-morning traffic.

"I am not ashamed to do this because it is our health that we are protecting, and so if we have a million more of us selling masks to protect our people then that will be good," said Schroeter.

"There is no income coming from the netball because of the COVID, and so this is what I have been doing in the mornings.

"I also work a few days at BH Paints, but selling these masks also helped me to take care of my family because time is hard right now."

He underscored that on an average day he sometimes earned up to $6,000 in sales.

"Whenever people see me on the streets selling masks they show me a lot of love and respect because they know that it is the right thing that I am doing," Schroeter said.

"I have been doing this for about six months now but sometimes things are kind of slow, but I still give God thanks for small mercies," he said.

Schroeter added that the financial assistance from private-sector companies in his area have also dried up due to the COVID-19 pandemic.

"The private-sector people who used to help us through netball can't really help again as their businesses have gone down, and this is really difficult for netball in this area," he said.

Schroeter noted that he sometimes conducts coaching sessions twice per week in order to keep his girls active.

"One and two times I call my girls to do exercise to keep their bodies in shape. I am waiting on the minister of sports to really open up netball so that the ladies can get something to do at least two days per week," he said.