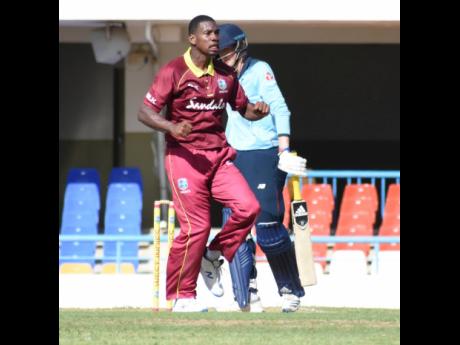 Tottering on 89 for five in the 22nd over in pursuit of a challenging 272 for victory at Braamfischer Oval, the Caribbean side rallied brilliantly through Morris who struck an unbeaten 96 off 93 balls and Young who hit 70 off 55 deliveries, as they overhauled their target with 19 balls to spare.

Morris belted half-dozen fours and three sixes while Young was equally devastating with six fours and four sixes, the pair posting an amazing 123 for the sixth wicket in quick time to rescue a run chase in peril.

Matthew Forde then weighed in at the end with a brisk unbeaten 23 off 21 balls with a four and a six to make victory certain.

Young had earlier made his presence felt with his pace taking four for 70 as Canada did well to get up to 271 for nine off their 50 overs, after opting to bat first.

Akhil Kumar top-scored with a polished 59 off 76 deliveries and Ayush Verma struck 42 not out, while Benjamin Calitz (38) and Randhir Sandhu (32) both got starts.

Sandhu struck seven fours in a breezy 35-ball knock as he helped add 53 for the first wicket with Mihir Patel (14).

When both fell to leave Canada on 74 for two in the 16th over, Kumar and Calitz put on an invaluable 93 for the third wicket to revive the innings.

Kumar faced 76 balls and counted five fours and two sixes while Calitz belted two fours and a six off 58 deliveries.

Nedd knocked over both in successive overs but Verma, with two fours and three sixes in a cameo 38-ball innings, helped put on 42 for the seventh wicket with Raqib Shamsudeen (19) to rally the innings.

In reply, Windies were rocked early when captain Kimani Melius fell to the fifth ball of the innings without a run on the board and Leonardo Julien followed in the third over with no addition to the score.

Mbeki Joseph, with 44 off 66 balls, led the fightback by posting 37 for the third wicket with Kevlon Anderson (14) and a further 30 for the fifth with Morris, before Young arrived to help change the game.

Windies face Scotland in their next warm-up game tomorrow.