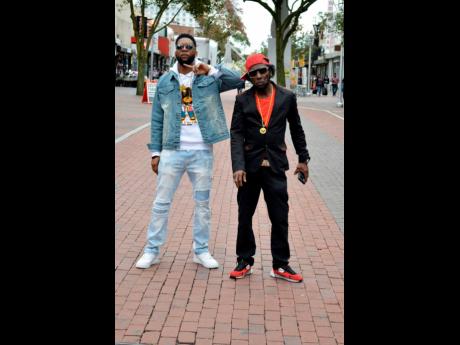 Dancehall artiste Flashmo has been a fan of 1990s deejay Nardo Ranks for some time, so when the opportunity presented itself for both to collaborate, it was an opportunity that Flashmo could not refuse.

Their collaborative single, Out Here, was recently released.

"Nardo is one of my big brothers in the music business for years now, so it was only natural for us to do a song. He is a dancehall legend, and I wanted him to be a part of my musical history," Flashmo explained.

Nardo Ranks scored a chart-topping hit in the early 90s with Dem A Bleach. Flashmo shared the inspiration behind Out Here.

"It was inspired by current movements in and out of our community, from performances, to movies and fashion, just the way that we carry ourselves," he said.

A former student of the St Jago High School, his interest in music developed from high school.

"But I never got serious until after I left. After leaving school, a schoolmate invited me to learn studio engineering at Record Factory on Hagley Park Road. From engineering, I went into songwriting and eventually recording," said Flashmo.

His first professional recording was in 2001 when he and a friend decided to start their own production, as he felt he was not getting the attention from well-known producers.

However, the first professional producer he worked with was Jah Mikes of Reggae Vibes Productions.

Since then, he has worked with Lloyd 'Bull Wackies' Barnes, Adrian Locke of Truckback Records, Jon FX, and Jay Crayzie, among others.

On the production side, his credentials include the Sweet Child rhythm (which featured Frankie Paul and Courtney Melody among others) and the Hatchback rhythm.